The whole week, I had two very different verses running through my head – Oh wouldn’t ya, barracuda and If I keep my eyes on Jesus, I can walk on water. The first because I was either catching barracuda or they were breaking my line, and the second, well, some part of that song is about being a fisher of men, and it came to mind every time I thought of how I wanted to catch something other than barracuda. I wanted to catch more of those pretty snapper, which were also super yummy! 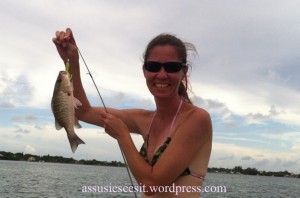 We took several pictures of us catching fish before there just didn’t seem to be a need to take more pictures. In other words, Dave caught so many fish, taking pictures of them became monotonous. A few we did take though are below. And not only did my honey catch most of our dinner, he cooked it too! There’s just nothing like fried fish on the grill. Of course, I had to take pictures of that as well.

He cleaned the fish, breaded the fillets and fried them in oil on the grill. Both the snapper and barracuda were good, but if I had to choose one I liked better, it would be snapper. When I told Dave that, he was like, “Duh!” Well I didn’t know.

It was one of many very nice evenings.

Welcome to my life!

While I created this site for myself, my family and friends, I also invite anyone who wants to, to follow along. (Please note – this is a separate blog from susieraffey.com. If you would like to be notified of new posts here, be sure to click “Follow” below.)

I date my posts to coincide with the event I write of, not the day I write the post. Just so you know. Don’t know why you need to know, I just thought I should say so.